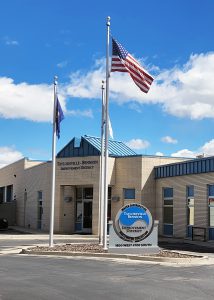 NOTICE is hereby given that the Board of Trustees for the Taylorsville-Bennion Improvement District (the District) will hold a public hearing on Wednesday, November 16, 2022, at 6:00 p.m. at the District offices located at 1800 West 4700 South, Taylorsville, Utah 84129.

The District is planning to increase water and sewer rates by 17% as well as increase the Central Valley Assessment fee. Also under consideration are increases to various administrative and development fees. The reason for the proposed rates and fees is to cover the District’s increased costs associated with each of the fees as well as costs associated with District and Central Valley Water Reclamation Facility projects.

The purpose of this hearing is to receive comments regarding the proposed rate and fee increases and to explain the reasons for the proposed increases. All interested persons shall be given the opportunity to be heard. Written comments are welcome and can be sent to P.O. Box 18579, Taylorsville, UT 84118 or via email to company@tbid.org. The deadline to receive written comments via mail or email is 4:30 p.m. on Tuesday, November 15, 2022.

In accordance with the Americans with Disabilities Act, the District will make reasonable accommodations to participants of the hearing. Requests for assistance can be made by calling 801-968-9081 at least 48 hours in advance of the hearing.

More information can be found on the District’s website www.tbid.org.

This Notice is being given in satisfaction of requirements of UCA §§ 17B-1-643.

Why are my rates being adjusted?

The Taylorsville-Bennion Improvement District (the District) has not been immune to the rapidly changing landscape of the economy, soaring prices, long supply delays, record-high inflation, and the effects of one of the worst droughts in Utah’s history. This has truly been an exceptional year on many accounts. We wanted to help you understand what has happened to cause such a significant increase to your rates this year. We hope the following explanation helps.

The District hired a 3rd party expert to analyze the District’s situation and the long-term effects of the abnormalities we have experienced this year, and ultimately to recommend rates and fees for the next 5 years. Bowen, Collins & Associates was hired to try and help us figure out a way to meet the needs of our water and sewer systems while keeping our rates as low as possible. Their analysis included the significant impact of the following 4 categories:

1. Inflation – The past 24 months has seen the Cost-of-Living Index increase by over 14%! As many of you have also experienced, it seems that many of the things that we need have increased more than that. From vehicles to shovels and everything in between, the District has been squeezed to stay within the budgets that have been set while maintaining the quality of service that you have come to expect from us.

2. Central Valley Water Reclamation Facility (CVWRF) – This is the wastewater treatment plant that processes and cleans all of the sewerage from our District. The District is one of seven owners of CVWRF and, due to newly imposed regulations, the CVWRF has had to undergo a $430 million project that changes the treatment process in order to meet the new mandatory limits for phosphorus. This project began 3 years ago at an estimated cost of $250 million. Because of the labor market, skyrocketing costs of supplies, and increased costs to bond, this project has almost doubled in cost.

3. Unprecedented Drought – It is no secret that water in Utah is quickly becoming scarce. While the District enjoys the use of its own wells, which produce about 65% of our water needs at a significantly less cost than purchasing surface water from Jordan Valley Water Conservancy District, it has seen the effects of the drought cause some funding issues. Most of the District’s costs are fixed, meaning they do not change based on how much water is used. As the drought causes us to change our watering patterns, the District has less resources available to provide your water and sewer services.

4. Increased Capital Project Costs – the District has several large capital construction projects that were needed in order to maintain the water and sewer systems. Many of our pipes are now over 70 years old and are in need of repair or replacement. The District has seen the construction costs for some of its projects increase by over 60%! Luckily, the District was able to secure a very low interest bond before the bond market interest rates increased significantly, but the costs of these projects has caused the bonds to not go as far as we had anticipated.